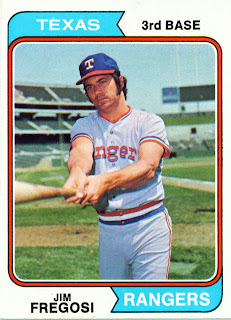 Jim Fregosi is listed as a third baseman on card number 196 in the 1974 Topps set. In spite of that he spent 100 more innings at first than he did at third. He would also miss 18 days of the 1974 season with muscle spasms.

In 78 games Fregosi would put in 312 innings playing first base without an error. He would make five errors in his 212 innings at third for a .929 fielding percentage.

Playing mostly when lefties were starting for the opposing team, Jim would get 253 plate appearances in 1974. He would post a .261 batting average and a .324 on-base percentage. 12 times he would circle the bases on a home run ticket. He would walk 22 times.

1974 wasn't too bad of a season for Jim Fregosi but it was far from his best. Time and injuries had taken their toll. He was on the downhill side of his career by the time Texas picked him up from the Mets midway through the 1973 season. Still, he had managed to stick as corner infield relief for a contending team and that wasn't too shabby.
Posted by Spiff at 4:00 PM

No doubt Topps used Fregosi's stats from the previous year to determine his position for the card: 51 games at 3B while only 13 games at 1B.