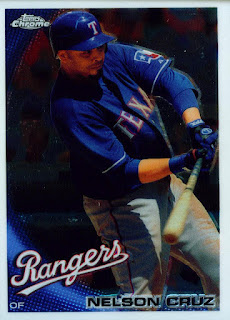 Let me start off by apologizing for missing most of the week. Things just got real busy at work and home. I kept thinking I would be able to get back but it didn't work out until today.

Gotta say that last night's 14-3 trouncing of the Blue Jays is a very nice note to come back on. Derek Holland was great as he went 7.1 innings. He allowed just two runs in the stretch and allowed just one walk while striking out nine.

In spite of that stellar performance I'm going to have to give Nelson Cruz the card of the day. Nellie is shown here on card 96 of the 2010 Topps Chrome set. Cruz went 4-for-5 in the game. He did strike out once but also doubled and hit a grand slam home run. All told he drove in eight of Texas' fourteen runs. Very nice.

In addition to that, he has already homered in today's game. Good to see Nellie's bat back and good to be back to posting.
Posted by Spiff at 4:27 PM