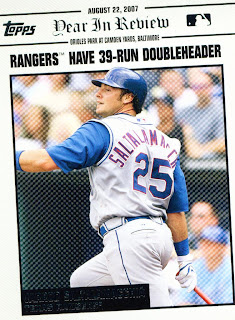 So, the Rangers come out of the weekend in sole possession of first in the Wildcard race but still 4.5 games behind Anaheim in the A.L. West. If they can stay hot the two series with Anaheim next month might help them gain some ground.

One area of concern right now is catching. Strange to think that the Rangers might need help behind the plate. Apparently everything hit at once though. Jarrod Saltalamacchia was put on the disabled list on Saturday. Apparently Salty, shown here on his 2008 Topps Year in Review card, was having difficulty throwing as a result of numbness in his right arm. Prospect Max Ramirez was just finishing up a stint on the DL in the minors and so wasn't deemed ready to come up. That left Kevin Richardson. Richardson was a non-draft signing in 2002 and has been in the minors since. Word is that the team is looking to make a quick deal to put a band-aid on the situation.

Hopefully the problem will work itself out without the need for a trade. If Richardson can hold on long enough for Ramirez to get back in shape, things could be well. Of course nobody seems to know what exactly is the issue with Salty. There is talk of Thoracic Outlet Syndrome. That would end his season. There are also darker rumors of a psychological throwing problem such as Mackey Sasser had. That could end his career.
Posted by Spiff at 11:39 AM

I'm pulling for the Rangers. They may even end up with the wild card.

Where the heck did Thoracic Outlet Syndrome come from??

How do you feel about Pudge being back?

I know it doesn't make sense but every win from here on end seems to be double in value to the wins of April and May.

wow - I had heard that Salty could be out for the season but I didn't know about TOS (don't want to spell it out). I just told my wife that he had Rube Syndrom (in honor of Major League 2) and just needed some time to clear his head.

I'm excited about Pudge's return. I know he's listed as a back up to Teagarden, but I still see Pudge as being both offensively and defensively superior to Teagarden. Hopefully Pudge will help lead the pitching staff stay strong and lead us into the post season.