The trouble with Josh. 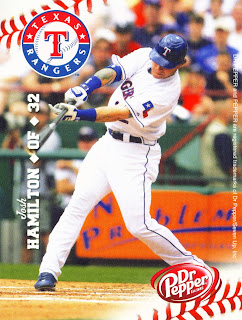 As most of you probably already know, Josh Hamilton made a major bad call this past Spring in Arizona. Hamilton, seen here on his 2008 Dr. Pepper card, went out to a bar and partied pretty hard with alcohol and women that weren't his wife. Major trouble.

The day after the incident, Josh informed the Rangers and his wife of what had happened. As far as I can tell he attempted to make no excuses but accepted responsibility for what he did. He recently had to apologize to the fans as well after photos taken during the binge became public and so made the failure a public issue.

As a Rangers fan and collector I felt I should say something on the matter. After all, a lot of other folks have. There has been no shortage of folks poking at Josh and at his faith, claiming that somehow this failing invalidates what has happened in Josh's life and Christianity as a whole.

In my view it doesn't and I will attempt to explain why. Josh was addicted to and had set patterns of behaviour involving alcohol before he was able to get his life together. Those patterns and addictions are not and cannot be conquered overnight. In his book Josh admits as much. At one point he says that he still fights the temptation for drugs and alcohol, sometimes daily.

For one to fail and fall is not unusual. The Apostle Paul, who wrote a significant portion of the New Testament, warns repeatedly of such failures and their consequences. In fact he talks even of his own failures in Romans 7:15, "For that which I do I allow not: for what I would, that do I not; but what I hate, that I do." Paul did what he hated? That's what he says. Is it possible that Josh Hamilton may have done the same thing?

At the time he wrote those words Paul was much more grounded in the faith and had more practice in it than Josh Hamilton. So why the struggle? Well, in Galatians 5:17 Paul addresses that question, "For the flesh lusteth against the Spirit, and the Spirit against the flesh: and these are contrary the one to the other: so that ye cannot do the things ye would." Yes, Paul was an adherent to the old saying that the spirit is willing but the flesh is weak. The natural tendency to sin that Paul and Josh Hamilton both have in common tends to trip them up from time to time, in spite of true and lasting changes in their lives. Paul never claims that perfection follows faith, just the strength to fight the inclinations of one's self.

As I look as this situation I realize that I have something in common with Josh Hamilton and Paul. I too struggle against the things that I know are not healthy or right for me to engage in. From time to time I too fail and fall. In those times I have to face the music, just as Paul and just as Josh Hamilton. Sometimes the consequences are more severe, sometimes less so. Oftentimes the severity is connected to the reaction of the fallen. In this case the consequences for Josh will involve his family, his employer, and the fans he has let down. The severity will likely be mitigated by his owning up to what he did.

Agreed. You did a very nice job summing things up.

Great post - the best one I've seen on the subject.