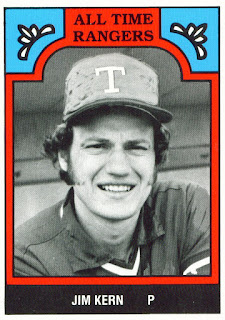 Day off yesterday and a late game in Anaheim tonight. That means it's time to move on down the list of T.R. Sullivan's 50 Best Seasons in franchise history.

Jim Kern is entry number 23 on the list with his 1979 performance. He appears here on card 3-RAN of the 1986 TCMA All Time Rangers set. Not sure why a set issued in 1986 uses such a badly done airbrush job when there are plenty of photos of Kern in a Rangers uniform.

Texas acquired The Amazing Emu from Cleveland on October 3, 1978. The return was immediate from the quirky reliever. Coming out of the bullpen in 71 games that year, Jim pitched 143 innings. That was just six innings shy of the Rangers third starter, Doc Medich. Kern converted 29 of his appearances into saves and won 13 games as well. He lost just five games. Jim struck out 136 opposing batters while walking 62. At the end of the season his ERA stood at 1.57.

Pretty amazing season. A performance like that is unlikely to be seen again anytime soon. With the strict limits that most teams observe on overworking their bullpens such use is rare. To see a pitcher used that hard be that effective is even more rare.
Posted by Spiff at 9:51 PM