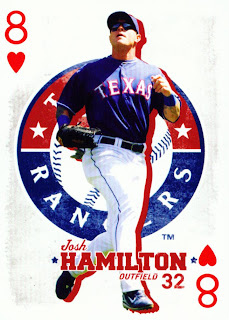 Finally some good news after a four game losing streak. Of course the draft also starts today so there may be some more good news on that front as well.

First off is last night's game. Coming off a Ron Washington talk, the team took the field against the Angels in wherever it is that the Angels claim they are from these days. Matt Harrison got the start. He went 6.2 innings and allowed three runs. Hairy still got the win though, thanks in part to Nelson Cruz's two run homer in the seventh inning. MLB.com places the long ball at 491 feet - the longest this season.

Elvis Andrus and Mike Napoli both had excellent nights with the bat as well. Alexi Ogando had a bit of a rough time with the three Halos he faced but he, Mike Adams, and Joe Nathan managed to keep and Angels runs from scoring in the final 2.1 innings. Great to leave the Big A with a win, even if not with the series. Now if they can just keep that up as they go into Oakland tonight.

The second item of good news concerns Josh Hamilton, shown here on the eight of hearts from the 2008 Academy Sports set. Josh was named the American League Player of the month for May yesterday. That follows on his April award and makes this just the second time in the American League that a player has won back-to-back player of the month awards to start the season. The first player to do it? Josh Hamilton circa 2008.
Posted by Spiff at 6:15 PM