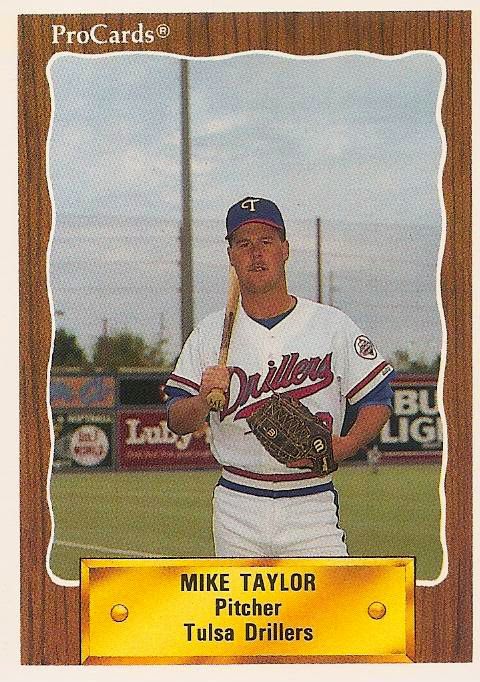 Well, Christmas is rapidly approaching and things are getting pretty busy here. Hope everyone is enjoying the season and not getting too overwhelmed by all the preparation. Taking a few minutes out to post since it's been awhile since I did so.

Today we have Michael David Taylor appearing on card 1156 of the 1990 ProCards Tulsa Drillers team set. Mike was drafted by the Orioles in the 1986 regular phase, and the Brewers in the 1986 secondary draft. He finally signed with Texas after being drafted a third time in 1987. Mike started his pro career the same year with the Gastonia Rangers.

Taylor spent three seasons at Single A. Two with Gastonia and one with the Charlotte Rangers. He gradually lowered his ERA and WHIP over the tree seasons. 1989 was his best at Single A as he turned in a 2.55 ERA and an 1.582 WHIP over 99 innings. It was up to Double A for the 1990 season.

Serving as a swing man, Mike made 9 starts for Tulsa in 33 appearances in 1990. He pitched 98 innings and ended the season with a 1-6 record and two saves. Taylor's lack of wins was probably attributable to his 5.79 ERA and 1.582 WHIP. His control seemed to have entirely deserted him as he hit ten opposing batters (career high) and walked 47 in between ten wild pitches (career high).

Double A had not been kind to Mike Taylor. He hadn't had a year quite as bad as 1990 since he signed with Texas. The loss of control in a right-hander was very concerning indeed. I can't determine if it was caused by an injury or some other issue and there's no way to find out if it would have gotten better. 1990 was Mike Taylor's last pro season.
Posted by Spiff at 12:14 PM