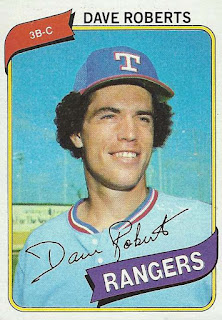 Well, not much positive to say about the Rangers last three games. Hopefully the guys can shrug off the double thumpings at the hands of the Twins and Red Sox. Since there's not much to say there, I decided today would be a good time to take another look back at a past player.

Up today we have Dave Roberts appearing on card 93 of the 1980 Topps set. Roberts came to Texas from San Diego in the trade that also netted the Rangers Oscar Gamble. Dave remained with the club longer than Gamble and actually got a card showing him in a Rangers uniform.

As you might assume from the position notation on the front of Roberts' card, he served as a utility player for the Rangers in 1980. Throughout the course of the season he appeared in 37 games at third base. He played 264.1 innings there and committed five errors. That gave him a .930 fielding percentage as compared the the league average .951. Dave's second most frequent position played was shortstop, where he played 107.2 innings over 33 games. He muffed three plays there for a .951 fielding percentage. The league average totaled to .963. As noted on the front of Roberts' card, he also played catcher. Over the course of the 22 games he appeared in as a backstop Dave played 145.2 innings behind the plate. He committed three errors to give him a .973 fielding percentage, once again below the league average of .986. While ten base runners stole on him Roberts did catch eight would-be thieves. That gave him a 44% caught stealing rate - well over the league average 35%. If those three positions weren't enough, Dave also played right field for 25 innings over five games, eight innings at first base in four games, and eight innings at second base in four games. Those appearances were without a miscue. Additionally, Roberts served as the designated hitter in three games.

In the 101 games he appeared in, Dave made 251 trips to the plate and struck out 38 times while working 13 walks. He posted a .238 batting average and a .280 on-base percentage while scoring 27 runs and knocking in 30 RBI. Roberts had some power in his bat - he hit four doubles and ten home runs but managed no triples.

In spite of his less than stellar offensive skills, Dave Roberts was an asset to the Rangers in 1980. A true utility player, he provided coverage at six different positions and filled in at DH as well. That's really a jack of all trades and something that's rarely seen anymore.
Posted by Spiff at 11:17 AM