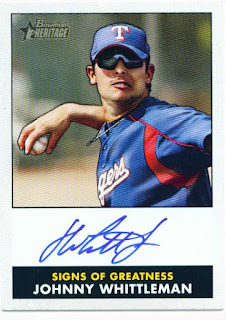 Well, with little to say positive about the Rangers past few games, I decided it is probably better to say nothing at all. Instead I went with a totally random Rangers autographed card.

Looking at this 2007 Bowman Heritage Signs of Greatness card I had to ask the obvious question, why does Johnny Whittleman have an arm growing out of his neck? Not the most flattering photo Bowman could have used. The next question is, who is Johnny Whittleman? Whittleman was the Rangers second round draft pick in 2005 and played mostly third base with a few appearances at first thrown in.

Johnny did all right his first season at Rookie ball in 2005 but his batting average tanked below the Mendoza Line during winter ball in 2006. Texas kept him in the system though but Whittleman had trouble getting his average up over .250. He managed to do so a few times but couldn't sustain the success and never broke the .300 mark. He never got above Double A with Texas and left the franchise after the 2010 season.

Starting in 2011, Johnny spent two seasons in the Kansas City Royals system without making it above Triple A. There is no record of him past the 2012 season. I guess in spite of the signs, Whittleman was unable to deliver on the greatness.
Posted by Spiff at 10:51 AM