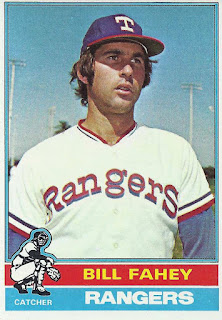 Unfortunately for Fahey, the effects of his injuries lingered. Not that they effected his performance but they had allowed Jim Sundberg to pass him in the organizational depth chart. With Sunny starting, Fahey was relegated to a back-up role.

In that role he played in 38 games and put in 228.1 innings behind the plate. He made just one error for a .993 fielding percentage. That was much higher than the league average .981. Fahey could be stolen on though. He caught just 32% of runners trying to steal on him. He nabbed 11 would-be thieves but there were 23 successful grabs.

On offense Fahey made 94 trips to the batter's box. He would post a .250 batting average and a .348 on-base percentage. He didn't demonstrate much power with just two doubles and one home run.

Bill Fahey had turned in a decent performance in 1976. It wasn't enough to get him the starting gig but it demonstrated that he could stay healthy and be effective. The one area that he really needed to improve in was his ability to gun down base-stealers. If he wanted to challenge Jim Sundberg for the starting job in 1977 he had to be practically flawless on defense and with the throws to bases.
Posted by Spiff at 3:34 PM