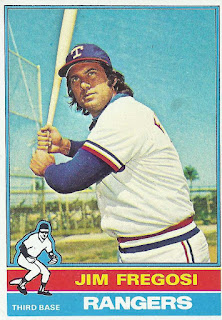 Continuing in his role as a utility player, Jim Fregosi appeared in 58 games for the Rangers in 1976. He appears here on card number 635 of the 1976 Topps set.

Topps again lists Fregosi as a third baseman. Again the truth is not quite as clear-cut. Jim played at first and third and as a designated hitter. His most common position was first base where he put in 193 innings and committed just one error for a fielding percentage of .995. Next was designated hitter, an assignment Fregosi handled for 18 games. Lastly was third base where he logged just 14 innings and one error.

Jim made 160 trips to the plate on offense and saw his batting average tumble almost 30 points to .233. Due in part to his 23 walks his on-base percentage actually climbed over the previous season to .342. Neither of those numbers are particularly good for a DH or a corner infielder. Fregosi's almost total lack of power didn't help. He hit just seven doubles, no triples, and two home runs in the course of the season.

1976 had seen the continuation of a steady decline for Jim Fregosi. At 34 years of age his injuries were starting to catch up with him. On June 15, 1977 the Rangers would trade him to the Pirates for Ed Kirkpatrick. In 1978 the Bucs would release him and end his playing career.
Posted by Spiff at 7:32 AM

Fregosi's main position on the '76 Rangers was center eater of the post-game spread. Man, he could eat!