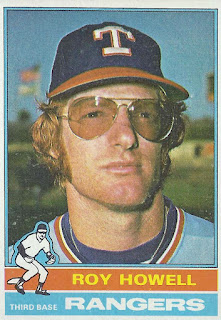 In just his second season in the Majors, Roy would appear in 140 games for Texas in 1976. 130 of those games were at third base, eight were at designated hitter, and two were presumably pinch-hitting appearances. Clearly Texas was trying to make Roy Howell their starting third baseman.

Howell would put in 1,111.1 innings at the hot corner. He would commit 20 errors for a .926 fielding percentage. That was 27 points below the league average. It also was a slight drop from the year before.

On offense Roy also struggled. In 531 plate appearances he posted a .253 batting average. That was one point higher than the previous season but his on-base percentage dropped 27 points to .295. Howell's power was a bit of a mixed bag. His doubles climbed to 28, his triples held steady at 2 and his home runs dropped to 8. Perhaps more ominously for Howell, his walks dropped by nine from the previous season to 30 while his strikeouts skyrocketed by 27 to 106 on the season.

Roy had plenty to work on if he wanted the Rangers plans to make him a fixture in their infield to succeed. His defense had to improve significantly. He also needed to improve either his power or his on-base percentage. Both would be nice but a significant upswing in one or the other might be enough to help him hang on.
Posted by Spiff at 11:33 AM

Funny that the next card I post on the 1979 Topps blog will be Roy. The only difference is he is a Blue Jay and not a Ranger. He should be up in a couple days!