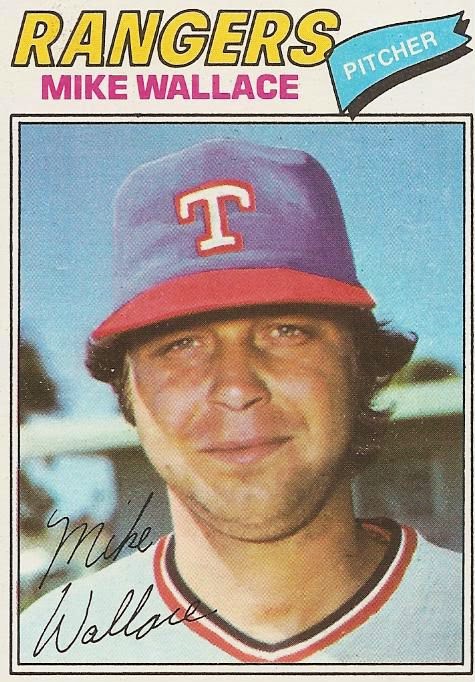 As is indicated by his airbrushed cap, Mike Wallace was something of a traveling man in his short Major League career. The Rangers sent minor leaguer John Sutton to the Cardinals for Wallace on October 22, 1976. Texas was Mike's fourth team since his Big League debut in 1973. He had been a Phillie and a Yankee prior to landing in St. Louis. He had yet to spend a full season in the Majors.

Wallace started the 1977 season with the Rangers. Working out of the bullpen, he had five appearances with 8.1 innings pitched by May 1, 1977. His 7.56 ERA and 2.400 were not calculated to inspire confidence. Having seen enough, the Rangers sent Wallace to Triple A Tuscon to finish out the season.

That was the end of Mike Wallace's career as a Ranger and as a Major League pitcher. He made his way back to the Phillies organization and spent the 1978 Season at Triple A in their system. The start of the 1979 season saw Mike at Triple A in the Baltimore system but he wouldn't finish out the season there.

Mike Wallace ended his pro career pitching for the Miami Amigos of the Inter-American League in 1979.

Mike Wallace finishes up the 1977 Topps Rangers team set. The next Topps Tuesday will see us moving into 1978.
Posted by Spiff at 11:45 AM

And then he went on to have a long career as an investigative reporter on 60 Minutes.