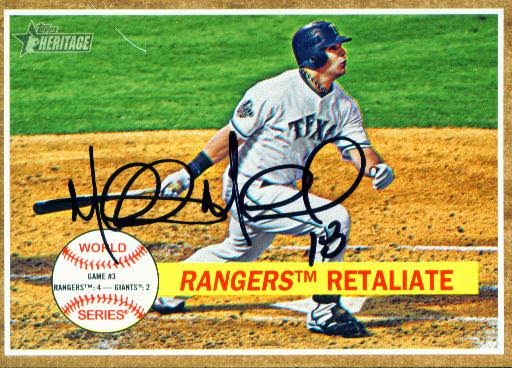 Time for an overdue write-up. Spiff Jr and I were offered free tickets to the Rangers game last Sunday (May 18th) by a friend in our church. Needless to say, we took up the offer.

I have to admit, preparing for the game I felt like I did in the late 80's and early 90's. The team was riding a four game losing skid and I did not expect them to come out of it. I was still excited about going, I just didn't expect a win.

We got to the ballpark around 1245 for a 1400 game time. Took all of 15 minutes to get parked and walk up to the park. The parking lots were packed and it seemed like there were people everywhere. I wondered if I was the only fan who had the memo on how far out of first the fourth place Rangers were. As we got in line just over an hour before game time the gate staff announced they were out of the Prince Fielder bobblehead giveaways. That meant at least 15,000 folks were already through the gates.

Once inside we decided to take a stroll around the park before finding our seats. The stroll turned into more of a slow walk due to the thick crowds but was still a pleasant experience. Looked at a few kiosks, picked up a program, and reviewed the look of the concourse before deciding it was time to head for our seats.

We sat up on the third deck with an excellent view of the field, shade, and a nice breeze. On a day that touched 90 we didn't even break a sweat. Those in the really pricey seats roasted I heard later from someone who was down close to the field. The folks around us were pleasant and there didn't appear to be many empty seats in the house. When the attendance of 43,671 was announced I believed it. Made me think of Josh Hamilton's comments about Rangers fans being spoiled and not willing to support the team when things get rough. Over 43,000 folks paying to see a team well under .500, not in the race, and with a ton of injuries seems like support through rough times. Maybe Josh needs to clarify his remarks a little.

Prince Fielder was out with his neck issues so Mitch Moreland, shown here on a signed 2011 Topps Heritage card, got the start at first base. That proved to work out well for Texas. The teams traded zeros for the first three innings with Nick Martinez giving the Rangers a strong start. Toronto got to him for a run in the top of the fourth with a solo shot from third baseman Juan Francisco. Alex Rios put the Rangers on top with a two run triple in the bottom of the frame. The Jays tied the game up with another solo home run in the sixth, this one from Edwin Encarnacion. In the bottom of the seventh Rios reached on a Francisco error to bring up Moreland with a runner on. Mitch snuck one over the right field fence. That ball probably had green paint on it from the top of the wall but it counted and put Texas on top for good. The Rangers managed to add two more runs in the bottom of the eighth on a pair of doubles (one from Moreland) and two singles. Joakim Soria finished the ballgame up with a shaky but scoreless ninth.

All in all a great day at the park. Got to spend some time with Spiff Jr and see the Rangers break their losing streak. Also got to see the new replay rules in action on an unassisted double play in the seventh that ended up going against the Rangers. A day at the ballpark is always a good one. A win makes it better. Many thanks to Chuck for the tickets.
Posted by Spiff at 11:28 AM

Glad you guys got to get out to the park. The way things are going, it's looking like a long hot summer.