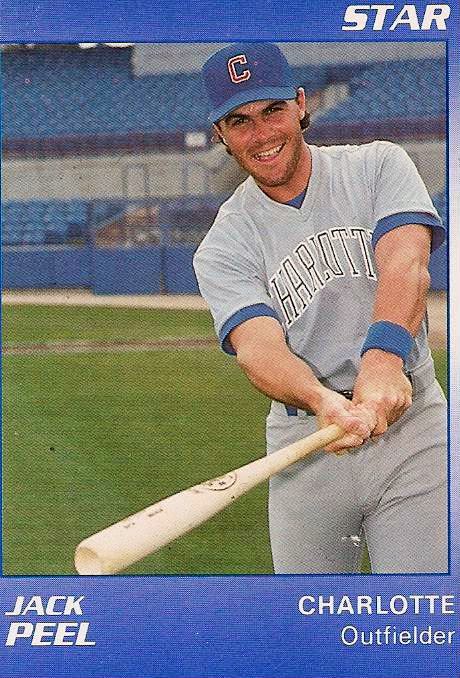 First let me start off by saying thank you to all the families of those who have fallen in defense of our country and the freedoms we enjoy. We should never forget those brave men and women or the sacrifices they made. I hope all remembered this as they enjoyed this Memorial Day.

I ended up spending a fair amount of my day at various ballparks. In San Francisco and Houston as Spiff Jr's Phillies and Pirates took on the Giants and Colt .45's in our 1964 Strat-O-Matic season replay. At Elysian Fields as Spiff Jr and his 2004 Rangers played exhibition games against the 1954 Giants and 1962 Senators. Perhaps the most enjoyable, at Field #4 as the family traveled down to the local park for some outside time. Spiff Jr and his team have tournament coming up so he went through his paces behind the plate while his sisters rode scooters alongside the field.

I think I probably had almost as much fun as Jack Peel is having on this severely mis-cut copy of card #20 of the 1990 Star Charlotte Rangers team set. I have no idea why the scanner read the border the way it did, it's actually a dark blue like the rest of the set.

Jack Peel started his professional baseball career in 1986 with the White Sox organization. I'm not sure how he moved over to the Rangers but by 1990 he had yet to play above Single A and Chicago gave up on him.

Peel spent the 1990 season with the A+ Charlotte Rangers, appeared in 87 games for Charlotte, and did indeed spend most of his time in the outfield as indicated on the front of his card. He committed two errors out there and ended the season with a .982 fielding percentage. Jack also appeared in one game each at first base and as a pitcher. He gave up a hit and a walk along with an earned run in one inning pitched to end the season with a 9.00 ERA and a 2.000 WHIP.

Unfortunately for Jack Peel, his offensive numbers actually dropped from his 1989 totals back into the neighborhood of his 1988 numbers. Apparently Texas decided they would stay there and they had seen enough of Jack Peel. 1990 would be Peel's last season in professional ball.
Posted by Spiff at 8:35 PM