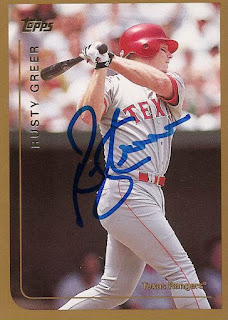 So, the Rangers kick off their half of the American League Division Championship Series this afternoon in Toronto against the Blue Jays. Going to be a tough series.

I really don't know what to expect from this series. Some hard played ball probably. Hopefully a Rangers advance. Could go either way though and things will likely get tight.

To do my part to help the guys out, I am posting this signed 1999 Topps card of Rangers great Rusty Greer. Mr. Greer signed this card for me through the mail in 2014. During his playing career Rusty embodied the never say die style of gritty play Texas is going to need to get past Toronto. This season has shown the team has the grit, now's the time to use it. Best of luck guys, trounce Toronto.
Posted by Spiff at 11:56 AM