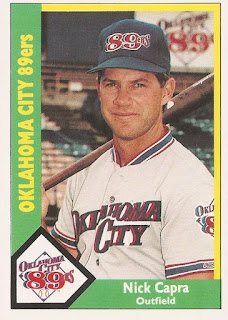 Apparently the Texas Rangers had an on again, off again type relationship with Nick Capra, seen here on card 166 of the 1990 CMC set. Texas drafted Capra in the third round of the 1979 draft. He had been drafted by the Expos in 1976 but didn't sign. He did sign with Texas. The club started Capra at Double A and he worked his way up to Arlington. Brief stints with the Rangers came in 1982, 1983, and 1985. In October of 1985 Nick was granted free agency. He signed with the White Sox in January of 1986 and spent that season at Double A.

Over all, Nick appeared in 122 games for the 89ers in 1990 and made 530 plate appearances. He put up a .277 batting average and a .375 on-base percentage. The on-base percentage was helped by the 68 free passes Capra worked while striking out only 61 times. There was also a little power in his bat as he compiled 26 doubles, three triples, and five home runs. Those hits helped him score 80 runs while driving in 45. Even at 32 years old, Nick had some speed. He stole 35 bases but also got caught 15 times.

On the defensive side of things, Capra spent most of his time patrolling the outfield. In 115 games cover the outfield he made just five errors. That gave him a .980 fielding percentage. There were also two cameo appearances at third base that went off without an error.

All told, 1990 was a decent season for Nick Capra. He put up some respectable numbers and seemed to be more than holding his own in Triple A. The problem for Nick was two-fold. First was the crowded Rangers outfield. It was going to be hard to break in without some Ruthian type numbers. Second was Capra's age. He still hadn't played more than 14 games in the Majors in any given season. At 32 years of age he still retained his rookie status. That wasn't a good thing. 32 is old for a minor leaguer who has never established himself in the Majors. Time was running out for Nick Capra to get a permanent call to The Big Show.
Posted by Spiff at 12:12 PM