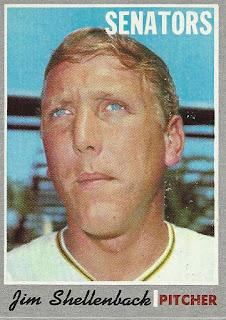 Jim Shellenback spent the most of the 1969 season with the Washington Senators after coming over from Pittsburgh in a May trade. Makes it a bit strange that Topps had no pictures of him in a Washington uniform. Instead, Shellenback appears hatless in his Pirates jersey on card 389 of the 1970 Topps set.

Jim was one of two long reliever/starters to operate out of the Senators bullpen in 1970, Jim Hannan being the other. Both got double digit starts with Shellenback starting 14 of the 39 games he appeared in. Over the 117.1 innings he pitched, Jim compiled a 3.68 ERA and a 1.347 WHIP. Both were noticeable drops from 1969. Shellenback struggled with his control though, he walked 51 opposing batsmen while striking out just 57. Surprisingly for a swingman, he tossed two complete games, one of which was a shutout. Jim ended the season with a 6-7 record.

All in all, Jim Shellenback's 1970 season was middle of the pack. He was in the middle in ERA, WHIP, and innings pitched for Senators relievers. While he had made progress from his numbers the year before, Washington was looking for more out of its pitching staff than in years past. That was going to put pressure on everyone to keep their spots. Shellenback was in a good position, thanks in part to his versatility, but he needed to keep his numbers moving in the right direction to stay away from Triple A.
Posted by Spiff at 3:18 PM