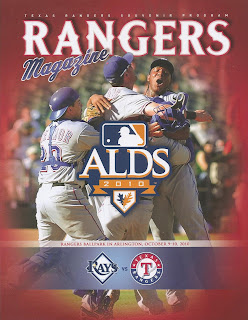 Going into the final three games of the 2015 season the Rangers needed just one win or one Astros loss to clinch the American League West divisional title. They let the Angels slip away in a 2-1 in a squeaker on Friday night. On Saturday they reprised Game 6 of the 2011 World Series with the Halos standing in for the Cardinals. Eventually the stunned Rangers lost 11-10. Meanwhile, Houston decided they would rather have the division than a wild card slot and refused to lose. Suddenly Texas was looking at one game left in the season and the possibility of game 163 to determine the division/wild card spots.

Cole Hamels initially did little to soothe the fears of Rangers fans as he allowed two runs in the first inning yesterday to give the Angels a 2-0 lead. Cole calmed down though and that was it for Anaheim. Hamels cruised through the next eight innings without allowing any more runs. Meanwhile the Rangers offense picked up a run in the bottom of the first. That was it through four and a half. With the Rangers trailing 2-1, Adrian Beltre once again put the club on his shoulders and hammered a two-run shot in the fifth to give Texas a 3-2 lead. Meanwhile the Astros were refusing to die in Arizona. Angels starter Garrett Richards left the game after six with the score still at 3-2. In the bottom of the seventh it all fell apart for the Halos bullpen. Texas exploded for six runs as Anaheim ran five pitchers to the mound before finally stopping the bleeding. It was more than enough though. Final: Texas - 9, Anaheim - 2.

Shortly after the Rangers victory, word came in that the Astros fell to the Diamondbacks 5-3. That mattered only to Houston and the Yankees though. Texas already won the American League West and was headed for the American League Division Championship Series. Most of the players are different, but the celebration was very similar to the one pictured on the front of this 2010 ALDS program. Elvis Andrus, Josh Hamilton, Colby Lewis, Mitch Moreland, Derek Holland, and several of the coaches are still around from that 2010 team and they all have unfinished business in the post-season. The quest to finish that business starts Thursday in Toronto.

I admit it, this team has been a huge, and very pleasant, surprise. After the loss of Yu Darvish in Spring Training, I had them pegged at 81-81 on the season and a third place finish in the West. After the loss of Derek Holland for several months on Opening Day, I figured they would have to really work to meet my prediction. When they traded for Cole Hamels I expected the impact to be first felt only in 2016. Instead they never ever quit and are now back in the play-offs for the first time since a brief wild card appearance in 2012. That exceeds my expectations for the season by several lengths and it's all a joyride now. Do I expect them to get to the World Series? Honestly, not really. Would I be surprised if they do? Pleasantly. Whatever happens, I'm going to enjoy the ride as far as the guys can take it and then be grateful to this group of players and coaches for restoring post-season baseball to Arlington.
Posted by Spiff at 10:56 AM