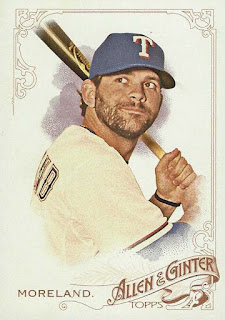 Well, once again I have no unposted cards of the players who most deserve to be featured from yesterday's game. That means Mitch Moreland, shown here on 2015 Allen and Ginter card 326, gets the nod. Mitch made some noise yesterday and contributed so it's not a reach to have him up here.

Yesterday afternoon was the rubber match of a three game series in Seattle. With the Mariners mounting the most current challenge to Texas in the American League West, the series carried weight. Cole Hamels took the mound for the Rangers still looking for his 2,000th strikeout.

Cole got some offensive support in the fourth inning as the Rangers put three on the board. Two of those runs came via a Moreland longball. Another three spot in the sixth accounted for the rest of the Rangers scoring for the day. Of note, Elvis Andrus, who has struggled in day games this year, went 3-for-4 with a double, two runs scored, two RBI, and a stolen base. Ian Desmond also got in on the action as he went 2-for-five with a pair of RBI as well.

Hamels ended up going a strong seven innings while giving up just one earned run. He also struck out five to reach the 2,000 level. Hamels left the game with a 6-1 Rangers lead. Unfortunately the bullpen stumbled, as they have been want to do this season, and the Mariners managed to push three runs across before the end of the game. In the bottom of the ninth with two outs Robinson Cano hammered what appeared to be a RBI double into the right field corner. Fortunately for the Rangers, Cano assumed he had second easily. Nomar Mazara had other plans. He played the ball off the wall, turned, and fired an unbelievable 220 foot laser to Andrus. Elvis slapped the tag on a surprised Cano to end the game. Seattle fans left the park in stunned silence. Rangers manager Jeff Banister later said that Mazara should have been credited with the save.

Great to see the guys leave Seattle with the series win. The victory also puts them 15 games over .500 for the first time this season and creates some breathing room in the AL West. They now have the best record in the American League and are tied for second best in baseball. Of course, they are slated to begin a four game set in Oakland tonight and the A's have always been a tough nut at home.
Posted by Spiff at 2:13 PM