On and off the DL. 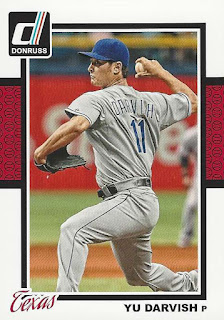 Well, the Rangers lost big last night to the A's due to a pitching meltdown. About the only good things to mention from the game are Mitch Moreland, Ryan Rua, and Shin-Soo Choo going deep.

That's right, Choo is back from the Disabled List. He was originally slated to get activated today but Texas brought him back a day earlier than expected. Good thing too, Adrian Beltre hasn't been back in action since encountering a hamstring issue in Seattle. No word on when he'll be back. Choo led off and went 1-for-4 with a walk and his solo homer. Nice to have him back and good to see some power in his return.

Of course, the game might have gone differently had Yu Darvish, shown here on card 351 of the 2014 Donruss set, made the start. The game was Darvish's regularly scheduled spot. However, he got pulled early from his last start with neck and right shoulder stiffness. Yesterday the Rangers placed Yu on the the 15 day DL. A MRI apparently showed no structural damage to his shoulder or neck but he will remained shut down until the stiffness subsides. Hopefully this is just a hiccup in his return from Tommy John surgery and not the beginning of becoming injury-prone. If Texas can ever see Darvish and Cole Hamels active in the same rotation the results could be nothing short of amazing.
Posted by Spiff at 11:24 AM