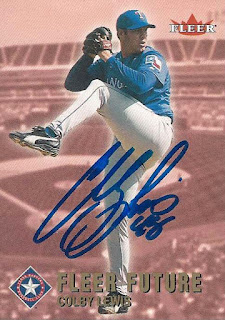 Yesterday was a good news, bad news type of day for the Rangers.

On the good news side, Cole Hamels dominated the Reds en route to another Texas win. Hamels struck out eight over six innings while giving up just one run. Jake Diekman had an unusual outing and coughed up three runs but otherwise the bullpen was great once again.

The offense picked Diekman up with Ian Desmond and Shin-Soo Choo homering as the bats put up six runs. Final: Texas - 6, Cincy - 4. Since this was a two game series and the Reds took game one, I am not sure if this counts as a series win or loss. Either way a win is always good news.

On the bad news side of the ledger, Derek Holland and Colby Lewis joined Yu Darvish on the Disabled List. Anytime a club has three starters on the DL there is cause for concern. Dutch got put on the shelf with left shoulder inflammation. He is slated to be out at least two weeks but it could be longer. Hopefully in the mean time he can get things figured out. The team has recalled Luke Jackson from Triple A to fill the hole on the pitching staff.

Colby Lewis, shown here on a signed 2002 Fleer card, is an altogether different matter. Not only was Colby having a great year, he won't be back in action for at least two months. Lewis left his last start early and an exam revealed he had a strained lat muscle in his right shoulder. Having Colby down will definitely hurt the Rangers.

A.J. Griffin is due to make his return from the DL on Saturday and Nick Martinez and Martin Perez will have to step up with Lewis and Holland gone. Hopefully they can bridge the gap until Darvish returns from the DL. If they can then perhaps the club can avoid dealing some of their prospects for a starter to keep them in the race.
Posted by Spiff at 1:10 PM