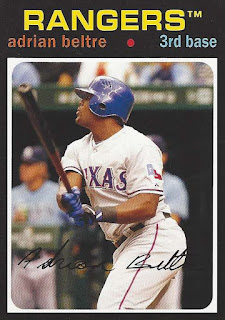 I have to admit, I didn't stay up and listen to the end of the Rangers game last night as they played in New York.

I did listen to the beginning of the game, where Ian Desmond hit a first inning home run to give the Rangers an early lead. I listened as Chi-Chi Gonzalez took the hill for his season debut. He coughed up the lead in the second inning, allowing two Yankee runs. Chi-Chi ended up having a rough night, lasting just five innings and surrendering five runs. Luke Jackson came in in relief but also gave up a run in an inning and a third. Finally, Tony Barnette stopped the bleeding and worked and inning and two thirds of scoreless ball.

Meanwhile, Yanks hurler Ivan Nova wasn't exactly having a cakewalk. Desmond struck again in the third inning with a fielder's choice that scored Robinson Chirinos. In the top of the fourth Shin-Soo Choo singled in Prince Fielder and Elvis Andrus. Rougned Odor ended the scoring I heard with a solo shot home run in the eighth to bring the score to 6-5 in favor of the Yankees.

In the top of the ninth New York reliever Arnoldis Chapman walked Chirinos. Then the umpires delayed the game for rain. The delay lasted a little over three and a half hours. I didn't last that long and hit the sack before play resumed. When it did Kirby Yates came in to pitch for the Yanks. He was wild, hitting Desmond and Nomar Mazara to load the bases for Adrian Beltre. Beltre, seen here on card 81 of the 2012 Topps Archives set, laced a single to left field. The hit score Jurickson Profar (who was running for Chirinos) and Desmond. That gave the Rangers a 7-6 lead but they weren't done yet. Fielder got hit by a pitch to re-load the bases. Up came Andrus. He singled to right field to score Mazara and Beltre.

In came Sam Dyson for the bottom of the ninth and he shut the Yankees out for the final innings. Final score: 9-6 Texas.

Too bad Gonzalez had such a rough outing. It would be nice to see him step up and fill a hole in the rotation. On the other hand, the comeback was nice too. For the most part the bullpen held the line again and allowed the bats to pull the team back into the game. Coming out after a lengthy rain delay and putting up a four spot is also very impressive. A delay of that length when a team is losing can cause a loss of focus or a resignation to the defeat. Great feeling knowing these guys never give up.
Posted by Spiff at 11:03 AM

Jeff Bannister had every right to be pissed about that rain delay. I'm glad the Rangers won that game.

Yeah, it was poetic justice.