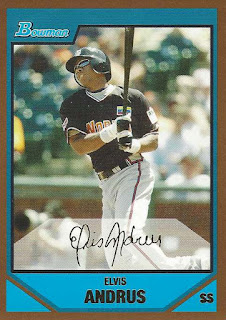 Going into the ninth inning last night in Denver, the Rangers were trailing the Rockies 3-1. Texas starter Cole Hamels gave up two runs in six innings and Keone Kela allowed Colorado to add a run in the eighth. Meanwhile, the Rangers lone tally came on an Adrian Beltre homer in the seventh.

The Rockies brought in their closer, Carlos Estevez, to pitch the ninth and send the Rockies faithful home happy. The Rangers had other plans. Adrian Beltre singled to lead off the inning. Rougned Odor hit into a fielder's choice that resulted in Beltre being out at second. Jurickson Profar walked to move Odor to second. That brought Elvis Andrus, shown here on card BDPP86 of the 2007 Bowman Draft Picks and Prospects Gold set, to the plate with runners on first and second.

Elvis faked a bunt while Profar and Odor pulled off a double steal. That re-set the table with runners at second and third. Andrus shot a single to center. Odor scored easily and Profar turned on the afterburners to add a second run. Just like that the game was tied with Elvis on first base. That was the end of Estevez. In came Boone Logan to try to keep the game tied. The first batter he faced was Mitch Moreland. Moreland hammered a screamer into the right field corner for a clean double. That scored Andrus from first and gave the Rangers a 4-3 lead. Mitch got thrown out trying to stretch the hit into a triple and Nomar Mazara struck out to end the inning but the damage was done.

In came Jake Diekman for the Rangers. A strikeout and a double play later Texas was celebrating a 4-3 victory. Waiting until the ninth inning and rallying against a closer is never a good option but a late rally is better than none at all.
Posted by Spiff at 11:44 AM

As a Rockies faithful, I did not go home happy last night.

Well, send me your address and I'll see if I have any Rockies I can send your way to make you a little happier.