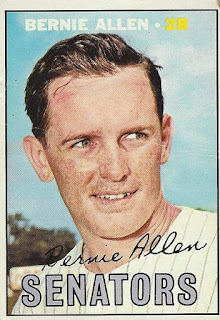 Have a brother getting married today so I am busy with that and you will have to settle for a pre-scheduled post. Of course, it's been a bit since the last Senators Saturday so maybe it's worked out for the best.

Be-freckled Bernie Allen appears on 1967 Topps card 118 in his Minnesota Twins pinstripes. He had played in the Twins organization since they signed him as an amateur in 1961. On December 3, 1966 the Twins sent Allen and pitcher Camilo Pascual to Washington in exchange for reliever Ron Kline.

Bernie jumped right into a competition with Bob Saverine for the starting second baseman's job. The two ended up platooning for most of the season but by the end of the year Allen appeared to have the upper hand.

Allen appeared in 87 games for the Senators in 1967. 75 of those appearances were at second base, the only position he played during the season. Over the course of 601.1 innings at second Bernie committed just four errors. That gave him a .990 fielding percentage, well above the league average .979 and completely blowing out Saverine's .957 fielding percentage.

Bernie made 279 trips to the plate for Washington. True to the Senator's luck with new players, his batting average dropped to .193 with his on-base percentage only getting up to .244. Indicative of the Senator's below-average offense, Allen scored just 13 runs and only picked up 18 RBI. He had a little power - five doubles, one triple, and three home runs; but also struck out more times than he walked (43/18).

1967 had been a mixed bag for Bernie Allen. His defense was outstanding but his bat appeared to have evaporated. With Washington being enamored of slick fielders and Bob Saverine struggling at the plate as well, Allen looked to have a pretty decent shot at second base in 1968. If he could get the lumber working again he might be able to nail down a starting gig for several years.
Posted by Spiff at 10:00 AM