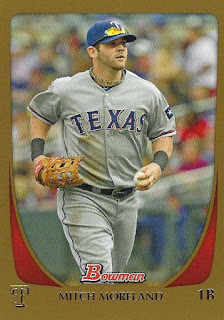 Apparently the Rangers have found their mojo again. Their win yesterday completed a four game sweep of the defending champion Kansas City Royals. Very nice to see the boys back to playing like they were earlier in the season. Maybe the rough patch is in the past.

The Rangers pitching showed much improvement in the series as Cole Hamels and Nick Martinez turned in very impressive performances. Newly acquired starter Lucas Harrell got the nod yesterday. He did well but wasn't overpowering.

Of note, the offense showed up as well. Perhaps the most obvious was Mitch Moreland, shown here on card 97 of the 2011 Bowman Gold set. Mitch hammered four home runs during the sweep. Perhaps the most impressive was his walk-off shot in the bottom of the ninth on Saturday to give the Rangers a 2-1 win. Encouraging to see the offense pick up the pace. Very nice to see Moreland coming through in Prince Fielder's absence. Even nicer to see the division lead get up to five games as a result of the sweep.

The trading deadline hits in just a few hours. So far the Rangers have made just one move, the trade that landed Harrell and reliever Dario Alvarez from the Braves in exchange for minor league infielder Travis Demeritte. There are rumors swirling though. Some link Texas to Brewers catcher Jonathan Lucroy and others to an assortment of pitchers. I'm a little torn on the idea of any real big moves. Colby Lewis should be back from the disabled list this month and the rest of the rotation seems to be picking up the pace. I think the club might already have the guns it needs to get to the postseason and make a run. That brings up the idea of trading tomorrow for today. This is a young club and the Rangers have a pretty decent farm system. There's no reason not to try to extend the playoff window as far as possible into the future. If there are too many trades from the system, then the window gets narrower. That's the everlasting debate though and Jon Daniels has so far shown he has the ability to keep the balance.
Posted by Spiff at 11:03 AM