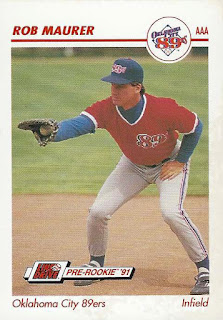 Realized it's also been awhile since I posted a minor league card. Decided to go ahead and get one up while I am thinking about it. Today we see Rob Maurer on card 312 of the 1991 Line Drive set. Following a pretty decent 1990 season with Double A Tulsa, Maurer got promoted to Triple A Oklahoma City to begin the 1991 season.

Rob appeared in 132 games for the 89ers in 1991, 120 of those games were as the team's first baseman. In spite of the infield designation on the front of his card, he played nowhere else other than first. Maurer's defensive issues continued as he made 16 errors in the course of the season to end with a .985 fielding percentage. That was a tic lower than the previous year.

Offense was another story however. Rob made 564 trips to the plate for OKC and put up a .301 batting average - almost identical to the year before. His on-base percentage jumped up to .420 though, in spite of his 135 strikeouts. Maurer did walk 96 times and that was an improvement over his time in Tulsa. Rob scored 76 runs while accounting for 77 RBI. He knocked 41 doubles, three triples, and 20 home runs.

Maurer's bat caught the attention of somebody in Arlington and when the rosters expanded in September, he got a call to join the Rangers. Rob made his Major League debut on September 8, 1991. He appeared in 13 games total for Texas in 1991. Two of those games were as the team's designated hitter, four other appearances were at first base. In the ten innings he played at first Maurer was flawless in the field. Once again, his offense was another story. Rob made 19 trips to the plate for Texas and struggled to a dismal .063 batting average. He did get his on-base percentage up to .211 but hit just one extra base hit - a double.

While Rob Maurer struggled in his limited time with the Rangers, he put up a solid season with the 89ers. Some stumbles are to be expected when a young player hits the Big Show and the Rangers weren't giving up on Maurer. He would again be assigned to Triple A for 1992.
Posted by Spiff at 10:30 AM