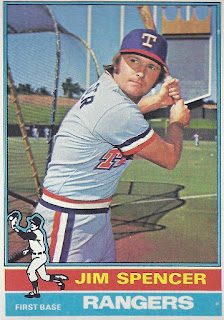 Jim Spencer was no longer with the Rangers by the time he appeared on card number 83 of the 1976 Topps set. By that time he was a traveling man.

Texas traded Jim to the California Angels for Bill Singer on December 10, 1975. The next day the Halos sent him to the Chicago White Sox as part of a four player trade.

Jim would stay in the Majors and be traded twice more before his career ended in June of 1982 after he was released by the Oakland A's.
Posted by Spiff at 10:33 AM No comments: 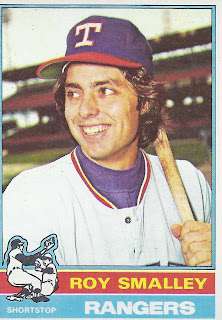 The 1976 Texas Rangers Media Guide touts Roy Smalley as part of the future of the Texas infield. In spite of the shortstop designation on card number 657 of the 1976 Topps set Smalley was seen as a potential rival for Lenny Randle at second base. Toby Harrah had short locked up.

Problem was, Roy couldn't get his bat going. In 164 plate appearances for Texas he hit just .225. That was just one point higher than Randle. Smalley's on-base percentage was significantly higher at .363 though and that earned him some playing time.

That increased playing time exposed Roy's second weakness, his fielding. Smalley's .963 fielding percentage was not only below the league average at second base, it was also well below Randle's less than sparkling performance.

With Randle working hard to nail down second base, Toby Harray ensconced at short, and Bump Wills at Triple A, Smalley's future was looking less and less certain with Texas.

On June 1, 1976 Roy knew for certain he no longer had a job with the Rangers. They sent him to Minnesota as part of a trade that brought Bert Blyleven to Arlington. Of course, Roy had reason to smile about the trade, the Twins manager was his uncle Gene. Gene Mauch that is.
Posted by Spiff at 7:04 PM No comments: 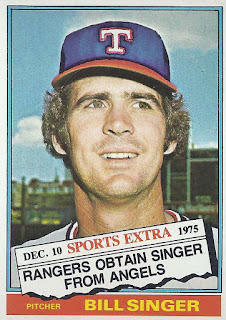 As the front of the card indicates, the Rangers got Singer from the Angels in a December 10, 1975 trade. Jim Spencer and cash went to the Halos in return.

Bill seemed to be doing well for the Rangers. However, the WHIP, walks, and injury history were all concerns. That meant Singer was expendable. On June 1, 1976 Texas sent Bill, Jim Gideon, Mike Cubbage, Roy Smalley, and cash to the Twins in exchange for Bert Blyleven and Danny Thompson. Apparently Bill wouldn't need much more than an airbrushed cap to cover his time in Texas.
Posted by Spiff at 11:22 AM 1 comment: 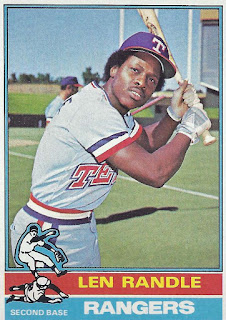 Kansas City seems to be an odd place for a Topps photographer to set up shop. That's apparently what happened though. Len Randle's picture on card number 31 of the 1976 Topps set isn't the only one taken in KC. Several others clearly show the crown scoreboard in center field.

By 1976 Lenny was in his sixth season with the Rangers franchise. That was one more season than the team had been in Texas. He had also gotten married on Christmas day, 1975. He headed into Spring Training with one goal in mind - a starting job.

After several years of position changes and practically being used as a utility man, Randle finally seemed to nail down a permanent position in 1976 - second base. He still played some outfield and even a game at third but most of his time in the field was at second.

Of course, Randle wasn't the smoothest with a glove at second. He committed 18 errors in 628 chances for a .971 fielding percentage. That was four points below the league average. Some of those errors might have been attributable to Randle having a bit more range than most second sackers but that wasn't the source of all of them.

Lenny made 597 trips to the plate in 1976 and posted a .224 batting average. That was over 50 points lower than the previous season. Even with his 46 walks, his on-base percentage tumbled 55 points to .286. There was also a power dip reflected in an 86 point drop in slugging percentage. About the only area offensively Randle saw improvement was speed. He stole 30 bases, an increase of 14, while getting caught 15 times, a drop of four.

While the speed was nice, Randle needed to improve both defensively and offensively if he wanted to hold on to second base. There were rumors of a young prospect named Bump Wills coming up through the system. If Lenny didn't get it going soon, the son of Maury Wills might well bump him out of his starting job.
Posted by Spiff at 11:28 AM 2 comments: 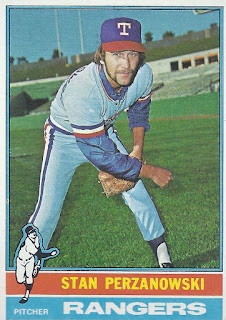