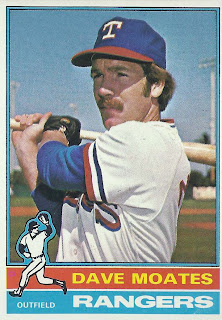 Dave Moates, shown here on card 327 of the 1976 Topps set, was a fellow 1969 draft pick to Joe Lovitto. Dave was selected by the Senators in the fourth round of the draft.

Moates had a cup of coffee with Texas in 1974 and then split the 1975 season between the minors and Arlington. In 1976 he would avoid the minors all year.

Moates' role as the team's fifth outfielder limited him to 85 games in 1976. In those 85 games he made 153 plate appearances. He posted a .241 batting average and a .293 on-base percentage. He hit seven doubles, one triple, and no home runs. Moates was considered a base-stealer but got caught in three out of nine attempts.

On defense Moates played in all three outfield positions. His fielding percentage was a decent .991, ten points higher than the league average. His range factor was about average.

Moates had a big problem with the bat. Mainly, he didn't seem to have much of one. Not sure if that was related to wearing his batting glove on his top hand or not. If Dave wanted to shove his way into the Rangers crowded outfield he would need to do it with his bat. Offense would have to be his area of focused improvement.
Posted by Spiff at 12:36 PM 2 comments: 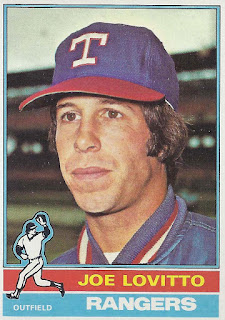 Wow, 20 days since I last posted. Things have been real busy lately but I didn't realize it had been that long. Finally seem to be able to see some light at the end of the tunnel. Looks like February at the latest to get the wife and kids moved down to join me. Should be able to get back to regular posting shortly thereafter. Until then it's just me and my Topps binder.

That was it for the number two pick in the 1969 draft. After just four seasons in the Majors, Joe Lovitto's playing career was over.
Posted by Spiff at 12:09 PM 1 comment: 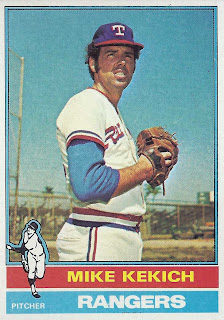 Relief pitcher Mike Kekich shows up here on card number 582 of the 1976 Topps set. By the time collectors were pulling this card from packs, Kekich was no longer with the Rangers. Texas released Kekich in March of 1976 and he spent that season in Mexico trying to come back from a shoulder injury.

Kekich was a solid pitcher early in his career before injuries took their toll. He is best known though for a 1973 trade he was part of. The trade involved Kekich and then Yankees teammate Fritz Peterson.

Unlike most trades, this one also involved Kekich's wife Susanne and Peterson's wife Marilyn. The two pitchers traded everything. Wives, kids, dogs, houses, all of it. When they showed up for Spring Training in 1973 and announced the arrangement there was a lot of surprise. Yankees executive Dan Topping commented, "We may have to call off Family Day this season."

Unfortunately for Mike, his end of the deal didn't work out. He broke up with Marilyn Peterson shortly after the swap. Fritz Peterson meanwhile married Susanne Kekich and they are reportedly still together. To add salt to Kekich's wound, there has been some recent talk of a movie about the incident. Mike refuses to cooperate though and is apparently dreading the possibility.
Posted by Spiff at 1:30 PM 1 comment: 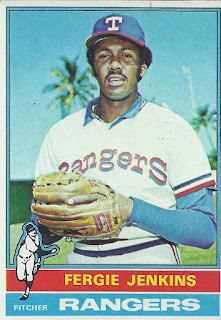 Texas had traded Fergie to the Red Sox in November of 1975. In return the Ranger had gotten Juan Beniquez, Steve Barr, and Craig Skok.

Jenkins would spend two seasons in Boston before coming back to Texas in December of 1977.
Posted by Spiff at 1:03 PM 2 comments: