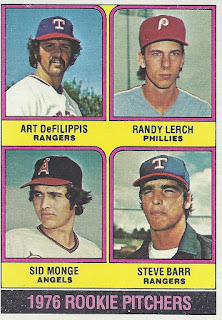 Rounding out my 1976 Topps Rangers team set is card 595. Since the card features two Rangers prospects we get a two-for-one today.

Art DeFilippis was a second round pick for the Senators in 1970. He started his minor league career the same year. 1976 was his last season in the Rangers farm system. He would play in the minors for two more years before hanging it up after the 1978 season. He's the only player pictured on this card not to see Major League action.

Steve Barr came to Texas from Boston in November of 1975 along with Juan Beniquez and Craig Skok in return for Fergie Jenkins. Barr had cups of coffee with the Red Sox in 1974 and 1975. 1976 would be a full season. Joining Jim Umbarger as the only other left-hander to make any number of significant starts for the Rangers, Barr would appear in 20 games and start half of them. He got hammered. In 67.2 innings pitched Steve posted a 5.59 ERA and a 1.685 WHIP. Part of the problem was control - he walked 44 while striking out 27. The other part of the problem was the gopher ball - he gave up 10 home runs, one about every six innings on average.

The Rangers got a good look at Steve Barr in 1976. They didn't like what they saw and left him unprotected in the 1976 expansion draft. The Mariners grabbed him as the 54th pick. Even with an expansion team Steve couldn't get back to the Majors. He lasted in the minors through the end of the 1978 season and then called it a career.

Randy Lerch and Sid Monge both spent quite a bit of time in the Majors. Monge even made it to the All-Star game. Neither ever played for Texas though so that's about all I'm going to write on them.
Posted by Spiff at 12:02 PM No comments: 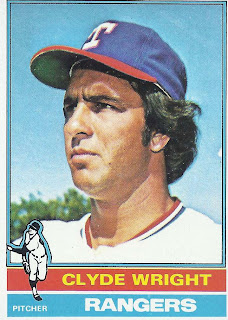 Clyde Wright, shown here on card 559 of the 1976 Topps set, had a good three year run for the California Angels in the early 1970's. By the time he came to Texas in December of 1974 he was struggling and looking to regain that form.

The struggles continued with a poor 1975 campaign. By early 1976 the Rangers were doubting Clyde could get his game back. Texas released him on April 2, 1976. No other teams picked him up. At age 34 Clyde Wright's playing career was over.

Fortunately Wright had a three month old son at home to take his mind off getting released. Clyde could now spend his time passing on his pitching knowledge to young Jaret. In 1994 Jaret Wright would be drafted by the Cleveland Indians and begin his own professional baseball career.
Posted by Spiff at 12:35 PM No comments: 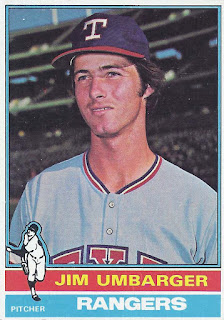 On card number 7 of the 1976 Topps set Jim Umbarger appears to be challenging Ed Brinkman for the long-neck award.

Umbarger came up with Texas in 1975 and appeared mostly as a reliever. In 1976 the southpaw moved into the starting rotation as all thirty of his appearances were starts.

Jim's violent pitching motion caused him to lose his cap on just about every pitch. It also helped him compile a 3.15 ERA (second best in the rotation) and a 1.328 WHIP over 197.1 innings. It is a measure of how bad the offense was in 1976 that Umbarger ended the season with a 10-12 record.

Going into the off-season Jim seemed to be sitting pretty. He had preformed well as both a starter and reliever on a Rangers club that was starved for good pitching. As a left-hander he was a minority on the staff. As a 23-year-old he was considerably younger than veterans Gaylord Perry and Nelson Briles at the top of the rotation. What Jim needed to do was lower his WHIP and stay consistent. That and figure out a way to keep his cap on while pitching.
Posted by Spiff at 12:16 PM No comments: 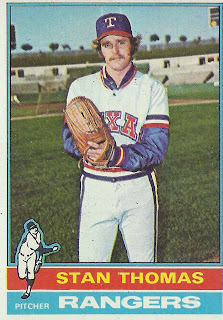 Stan Thomas has the hair wings going on card number 148 of the 1976 Topps set. Looks like he could take flight at any moment.

By the time this card was issued Stan had flown away. On December 9, 1975 Texas traded Thomas and Ron Pruitt to the Cleveland Indians for catcher John Ellis.

The trade really didn't alter the course of either team. Cleveland lost Thomas to the Seattle Mariners on November 5, 1976 in the expansion draft. They held on to Pruitt until 1980 when they traded him to the White Sox for Alan Bannister. Ellis served as a backup to Jim Sundberg in Texas until after the 1981 season.

**Just as a short programming note, I am buying a house this week and selling one next week. As such, the posts could be sporadic. Thanks for understanding.**
Posted by Spiff at 12:41 PM No comments: 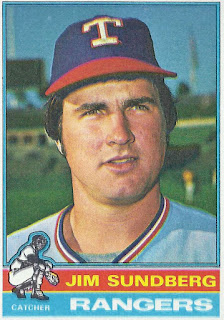 By the time Jim Sundberg appeared on card 226 of the 1976 Topps set he was firmly entrenched as the Rangers starting catcher.

Under normal circumstances Sunny's .228 batting average and .285 on-base percentage would not be good. However, they represented a 29 point and three point improvement over the previous season. Jim could still use some work with the bat but he appeared to be making improvement and getting past the sophomore slump he fell into in 1975.

After watching three of his runners get gunned down on September 17th, A's manager Chuck Tanner weighed in. He called Sundberg "the best defensive catcher in the league." He wasn't the only one who thought so, Jim received his first Gold Glove in 1976.
Posted by Spiff at 11:25 AM No comments: