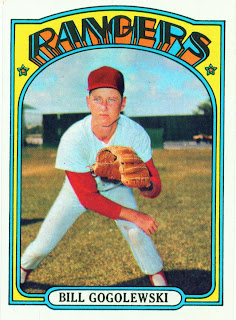 So the Rangers have gone down to defeat the past two days in the Cactus League. Looking at the box scores it appears that a lot of guys are getting looked at. Probably one of the reasons for the losses, also a good strategy in Spring Training.

Nelson Cruz is taking off to play for the Dominican Republic in the World Baseball Classic. He played today but that will be it until after the Classic. Ron Washington says that his job is not in danger.

In the spring of 1972 Bill Gogolewski left his home in Oshkosh, Wisconsin and traveled to Spring Training as part of the Texas Rangers' inaugural team. Gogolewski, seen here on card number 424 of Topps' 1972 set, had already pitched a full season for the Senators in 1971 after debuting in 1970. He would serve with the Rangers for two seasons before being sent to Cleveland in a trade in March of 1974. Seems that Texas made a lot of trades with Cleveland in the early years.

The thing that sticks out to me about his card is the fact that we can see Bill's socks. After getting daring with Tim Cullen's photo, the Topps photographer threw caution to the wind with Gogolewski. Rather than a posed shot from the waist up we have a posed shot with almost a full-body view. Wow! I just hope that such derring-do didn't cost anyone their job at Topps.
Posted by Spiff at 4:51 PM