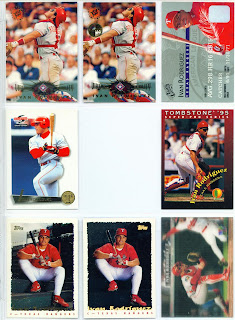 Well, the pitchers and catchers are all in camp. At least those with contracts are. Still no Pudge signing, but the Marlins are still professing some interest. It seems to me though that time runs short.

The empty pocket is left for the 1995 Summit Nth Degree #82. On this page I like the Studio most which is strange considering that I believe credit cards to be a necessary evil at best. I find the 1995 Stadium Club Virtual Reality Members Only card to be amusing and frustrating at the same time. A parallel of a parallel? Why?
Posted by Spiff at 7:43 AM