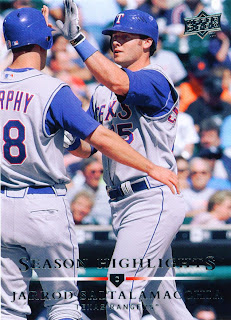 One of the jobs up for grabs this spring with the Rangers is the starting catcher spot. With the departure of Gerald Laird there is a vacancy. Jarrod Saltalamacchia, shown here on card number 397 of Upper Deck's 2008 offering, is hoping to get the nod.

Salty is the front-runner for the job but may face some competition from Taylor Teagarden. Prospect Max Ramirez is likely to start the season in triple A and Adam Melhuse will only make the team if a miracle occurs.

While Jarrod has a lot going for him, he also has some weaknesses that Teagarden may be able to exploit. Salty has almost ten times as many major league games to his credit as Teagarden. He is also considered to be a decent offensive threat. On the other hand, his defense is not rated as highly as Teagarden's and he tends to get in a hurry and make erratic throws.

Most likely the final decision will come down to which catcher best handles the pitching staff. Manager Ron Washington rates that skill highly and the Rangers need that type of catcher. Could be interesting to see what the Rangers have on the plate on Opening Day, Salt or Tea.
Posted by Spiff at 11:42 AM

Quite possibly the single greatest name is baseball - Saltalamacchia. I love it! Have you seen the '09 Topps card w/ him and Hamilton on it? Great look.