Cactus League off to a good start. 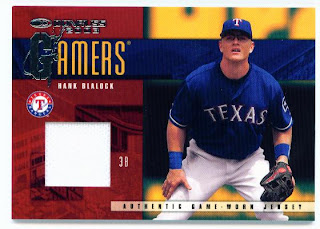 The Rangers came out of the chute big yesterday in their Cactus League opener yesterday. They managed a 12-7 win over the Royals. I know, I know, it's only Spring Training and doesn't mean anything. Still, it's nice to see them come out swinging, so to speak.

Hank Blalock led the bombing with a two run homer in the first and a triple later in the game. If he can keep producing like that all season, he will work out nicely as the DH.

Today's card of Hank is number G-23 in the 2003 Donruss Gamers set. It features a piece of a jersey "personally worn by Hank Blalock in an official Major League Baseball game." It is also numbered 57/500.
Posted by Spiff at 11:54 AM