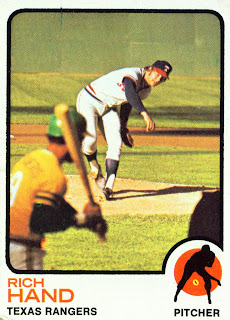 So Rich Harden was pretty impressive against the Oakland A's last night. I don't have a Topps card of Rich Harden in a Rangers uniform so I am going to substitute another Rich who is facing off with the A's. Rich Hand appears on card number 398 of the 1973 Topps set as he follows through on a pitch to a member of the Athletics.

1973 was Rich Hand's second season with Texas. He was primarily a starter that year, kicking off seven of the eight games he appeared in. In those games he went 2-3 with a 5.40 ERA. He gave up 19 walks and 49 hits in 41.2 innings pitched while striking out 14. Rich also hit two batters and threw one wild pitch.

On May 20, 1973 the Rangers traded Rich to the California Angels along with Rick Stelmaszek and Mike Epstein. In return the team got Lloyd Allen and Jim Spencer. Rich would show up in 16 games for the Angels that year and would spend all of 1974 in the minors before calling it a career.
Posted by Spiff at 6:25 PM

That is one of my favorite cards.