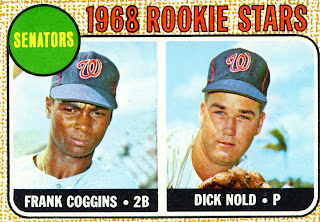 Today we come to the last 1968 card currently in my collection, number 96 in the set. This card is not nearly as popular as number 177 in the set, the Mets Rookie Stars. Of course Jerry Koosman was a better pitcher than Dick Nold.

Frank Coggins signed with Washington prior to the 1963 season. He had first shown up in the Majors in 1967. In 1968 he would serve as Bernie Allen's backup at second base. He would also spend some time in Triple A. While with the Senators in 1968 he appeared in 62 games. In 419.2 innings in the field he managed only a .953 fielding percentage, 25 points below the league average. That happens though when you commit 12 errors. If Frank was hoping his bat would save him he was mistaken. In 183 plate appearances his batting average was a paltry .175 with a .215 on base percentage. Not a good way to stick with the club.