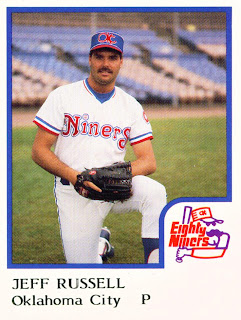 Jeff Russell was in transition when he appeared on his 1986 ProCards card. He had started his career with the Reds as a starter. After Jeff lost a league leading 18 games in 1984 the Cincinnati shipped him off to Texas to complete an earlier deal for Buddy Bell. Russell split the 1985 season between the minors and Texas. He started every game he appeared in that year.

Starting wasn't working for Jeff. The Rangers needed bullpen help. They called him up and into the pen he went for 37 appearances in 1986. The bullpen is where he would stay for the rest of his career with the exception of the 1988 season.
Posted by Spiff at 11:33 AM

It also interesting that he's wearing a left handers glove, but threw right handed. I wonder what was up with that?

Good eye! I completely missed that detail. Wonder what the story is...