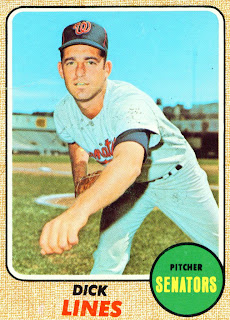 Today we see lefty Richard Lines on card number 291 of the 1968 Topps set. Lines was primarily a reliever for Washington when he was with them. He wasn't with them in 1968 though. He spent the entire season in Triple A. He would split the 1969 season between Triple and Double A and that would be it for his pro career.

Kind of a short entry today. Excellent time to introduce a great blog on the 1968 Topps set. Jim from Downingtown runs several great set blogs. He does a great job on each and 1968 Topps Baseball is no exception. If you haven't had a chance to check out Jim's sets then now's the time. You'll learn a lot and see some great cards.
Posted by Spiff at 4:44 PM