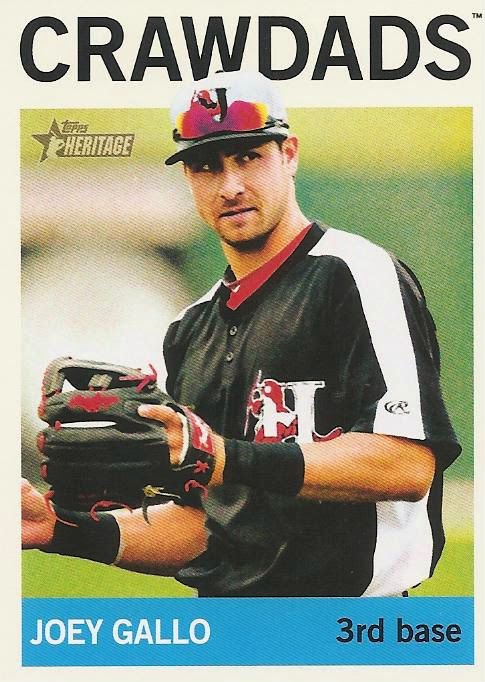 I don't usually get too excited about minor league prospects. If you're a regular reader of Minor League Monday you'll know why. Most of these guys never make it to the Majors. However, the 2014 season has been so dark in Texas that any points of light are brighter than otherwise.

Joey Gallo, shown here on card 62 of the 2013 Topps Heritage Minor League set, is one of those minor league glimmers of hope for the Rangers. Yesterday in the All-Star Futures game he showed why.

By all accounts the futures game was a pitching duel. The scoring ended in the sixth. The final runs were put on the board by Gallo when he hammered a two run blast into the second deck of Target Field. That gave the U.S. a 3-2 lead that would hold up. Gallo was named the Futures Game MVP for his performance.

Home runs are Joey's stock and trade. He's got 31 of them this year and is in a tie for the minor league lead. That's got some folks calling for his promotion straight from Double A to the Bigs. Not a good idea. Joey Gallo's tape measure shots may be fun to watch but they're not going to save the Rangers 2014 campaign. Along with his long balls he also strikes out a lot. Major League pitchers would love that aspect of his game. Better to let him continue to season and develop so that when he does hit Arlington in a couple of years he does so with maximum impact.

Hopefully Joey Gallo will shine in Arlington sometime in the near future. For now he is a Double A star whose glimmer reaches from Frisco to Arlington and gives fans a little bit of light in the dark.
Posted by Spiff at 11:25 AM