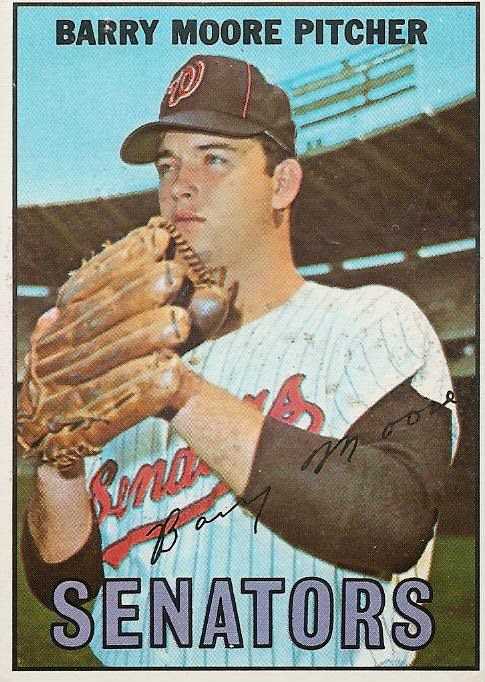 For the second week in a row we see a Senator sporting a huge glove. Barry Moore and his glove appear on card 11 of the 1967 Topps set this week.

The Senators had high hopes for Moore when they called him up in 1966. The lefty had some control issues but if he could conquer them he had a lot of potential. He did well enough in 1966 to get a second season in 1967.

Primarily a starter, Moore appeared in 27 games for Washington in 1967. All but one of those appearances were starts. His 3.76 ERA was almost identical to the previous season and only good enough for fourth among the starting rotation. In 143.2 innings pitched Barry tallied a 1.378 WHIP, a significant drop from the year before. His control problems persisted though. He walked 71 batters while striking out 75. He also hit three opposing batsmen and uncorked five wild pitches. He ended the season with a 7-11 record.

The Senators pitching was improving. In years past Barry Moore might have been the number two guy in the rotation with his 1967 numbers. By 1967 his stats were good enough to keep him on the staff until a better alternative came along but not good enough to nail down a spot. If Moore wanted to make the Washington rotation his permanent home he needed to get the control issues worked out and cut the number of walks.
Posted by Spiff at 11:26 AM