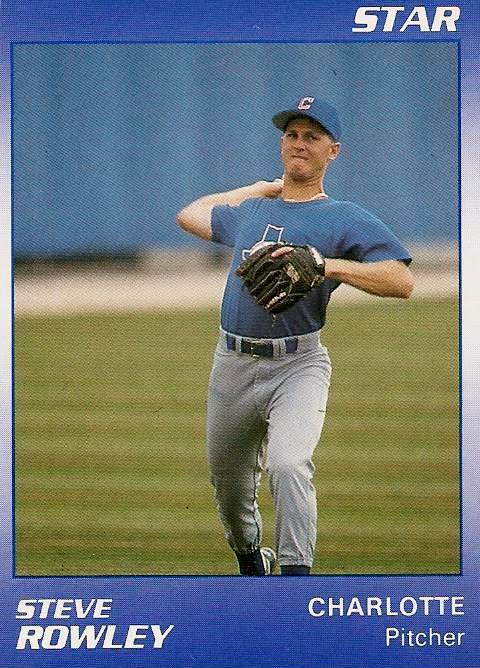 Steve Rowley, shown here on card 24 of the Star Charlotte Rangers team set, was a 10th round draft pick for Texas in the 1989 draft.

Rowley started his pro career in 1989 with the Butte Copper Kings in Rookie ball. His 4.12 ERA and 1.508 WHIP were not promising signs but he got bumped up to Single A and started the 1990 season with the Gastonia Rangers.

Posting a 2.55 ERA and a 1.377 WHIP over 81.1 innings with Gastonia earned Rowley a mid-season promotion to A+ ball and the Charlotte Rangers.

Strictly a starter, Steve would make five appearances and pitch 23.2 innings for Charlotte in 1990. His ERA more than doubled to 5.32. That was because he issued 21 walks en route to a 1.690 WHIP. The seven strikeouts he recorded didn't even come close to balancing the books. Not surprisingly, Rowley ended the season 0-4 with Charlotte.

Even though he was struggling with the transition to a higher level of play, the Rangers left Rowley at A+ ball for the 1991 season. If he was going to be able to improve he would. If not, well it's better to find out sooner rather than later with a limited amount of roster spots in the farm system.
Posted by Spiff at 10:14 AM