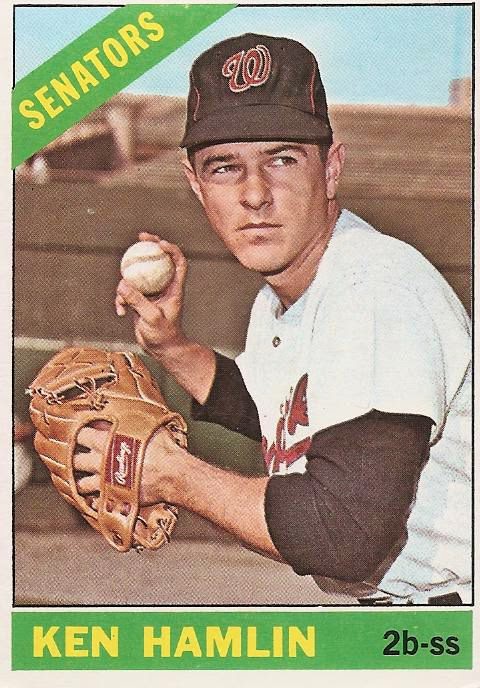 Can't help but notice the glove Ken Hamlin is wearing on card number 69 of the 1966 Topps set. That thing looks huge, especially for a middle infielder.

By 1966 Hamlin was in his fifth year with the Washington Senators organization. Two of those years were spent in the minors and two in platooning situations. Ken had yet to break into a regular starting role with the team.

1966 was not going to be Ken Hamlin's year either. With the arrival of Bab Saverine at second and with Ed Brinkman holding down the starting shortstop gig, Ken was relegated to backup duty and saw his playing time decrease from the previous season.

Hamlin played in just 51 games in the field for Washington, all but one of those appearances was at second base. Over the 356 innings he played at second, Ken made eight errors and ended the season with a .963 fielding percentage at that position. That was well below the league average .975 fielding percentage.

Hamlin got a few pinch-hitting chances to go along with his play in the field. Over all in 1966 he appeared in 66 games for the Senators in 1966 and made 180 trips to the plate. His .215 batting average and .267 on-base percentage were not calculated to help get him more consideration as a regular. Both were significant drops from the previous season.

After five seasons it was obvious there was no future for Ken Hamlin with the Washington Senators. In fact, there wasn't any future for him as a pro player. Ken hung up the spikes after the 1966 season and went to work on other ventures. He ran a boys camp and served as a high school baseball coach among other things in his post-baseball life.
Posted by Spiff at 11:00 AM