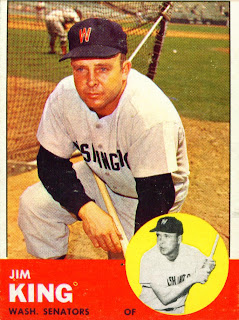 I have no idea what it is about this copy of card number 176 from the 1963 Topps set but my scanner keeps cutting off the top border. Well, at least it doesn't cut off any of the picture of Jim King.

King was in his third season with Washington in 1963 and functioned as their primary right fielder. In 136 games he spent 990.2 innings in right field and only 13 innings in left field, the only other position he played. Jim committed just three errors in right and his .987 fielding percentage was seven points higher than the league average.

Jim also made 511 plate appearances in 1963. With his .231 batting average and .300 on-base appearance he was the lightest-hitting member of the Senators regular outfield. His bat did have a some pop in it though as he homered 24 times, tripled five times, and hit 16 doubles. The 24 long balls were good enough to rank second on the team behind center fielder Don Lock.

With the added thunder in his bat and his defensive performance, Jim King was working hard at hammering down a permanent spot for himself in the Washington outfield. What he needed to do for 1964 was cut down on his strike outs, work more walks, and raise both his on-base percentage and batting average.
Posted by Spiff at 7:43 PM