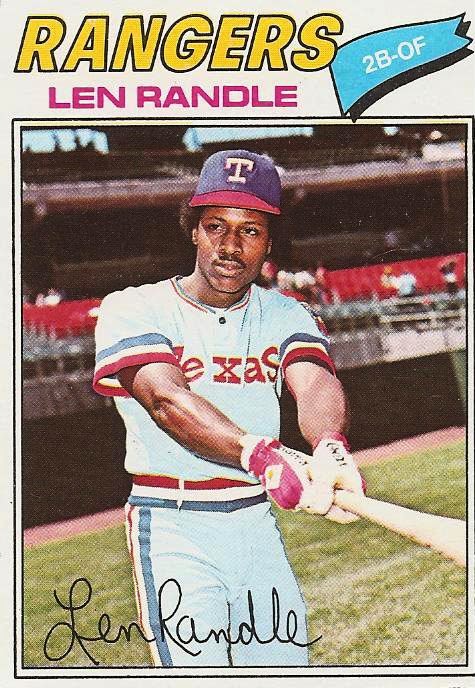 Going into Spring Training 1977 the Rangers viewed Len Randle, shown here on card 196 of the 1977 Topps set, as the experienced veteran capable of playing mutiple positions. What they didn't view him as was their starting second baseman. Lenny did though.

After years of being used as a utility man, Randle finally nailed down a starting job at second base in 1976. He wasn't a star there but he wasn't about to let it go without a fight. Problem was, the job wasn't his to lose. The Rangers had given it to rookie Bump Wills.

It became obvious to Randle that he was not going to win second back from Wills. As Spring Training wore on he became increasingly frustrated with the prospect of another season as a utility man. He threatened to leave camp. Some of his fellow players talked him out of it. Word got back to manager Frank Lucchesi.

Lucchesi wasn't impressed by Randle's bat, glove, or attitude. He remaked that it was a shame Randle's teammates stopped him from leaving camp. Guys making $80,000 a year and whining didn't sit will with the Rangers skipper. He considered them punks. He said so to some reporters.

On March 28, 1977 the Rangers were in Orlando, Forida to take on the Twins in a Spring Training game. Randle approached Lucchesi during batting pratice and asked to speak to him. The two stepped aside and spoke briefly. Lenny ended the conversation by punching Lucchesi in the face several times and leaving him bleeding and unresponsive on the field.

Other players restrained outfielder Ken Henderson as he started to go after Randle. An ambulance transported Lucchesi to a hospital where he would be operated on and spend several weeks recovering. The Rangers suspended Randle and fined him $10,000.

Henderson declared he wouldn't play with Randle again. Obviously Lucchesi didn't want him to come back. The Rangers had to do something. On April 26, 1977 the Rangers gave Randle to the Mets for some cash and a player to be named later. Randle had his fight and still lost his job.
Posted by Spiff at 10:30 AM

I think you meant that Randle said he wouldn't play with the Rangers again, not Henderson.

No, it's worded correctly. Ken Henderson said he would not play on the same field with Len Randle again after the attack.