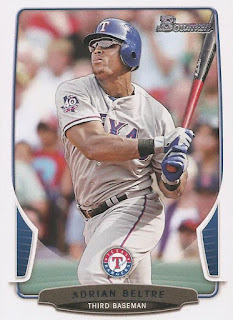 Texas won their third straight last night as they topped the Giants 6-3. What's remarkable is not that they beat San Francisco, the first two wins came against the Yankees, or the length of the win streak. What's remarkable is that they won three in a row at home. The team with the worst home record in baseball might be waking up.

All of the Ranger runs scored in the first two innings as Texas jumped all over Giants' starter Madison Bumgarner (more on him later). Adrian Beltre, shown here on card 132 of the 2013 Bowman set, and Elvis Andrus both had two run homers to provide the bulk of the Rangers offense. Roughned Odor also went 3-for-3 in the game and scored a run. Meanwhile on the mound, Nick Martinez returned to his June form as he went 6.1 innings while striking out four and allowing just two runs. Newbie Jake Diekman took over from Martinez and made his Ranger debut with 1.2 innings of scoreless work. Jake handed off to Shawn Tolleson who allowed a Brandon Crawford home run before getting the game closed out. Very nice to see they club firing on all cylinders.

Tonight the team debuts new hurler Cole Hamels. A win to start off his time in Texas would be very nice indeed.

By now my antipathy towards the Giants should be pretty well known to all. They rate right around the Yankees in my book and are doing their dead-level best to oust New York from the cellar. My dislike has little to nothing to do with the 2010 World Series (the Cards are still my NL team, even after 2011) and much to do with the behaviour of their management and players. Yesterday was another strike. I don't like to talk down on other teams but I have to say something here.

Starter Madison Bumgarner had a rough first couple of innings before settling down and shutting Texas down. That seemed to put him in a foul mood and he took further umbrage at a hard slide into second by Roughned Odor in the fourth inning. Why he would take personal offense at that is beyond me. Delino DeShields popped up to end the fourth. As DeShields trotted down the first base line waiting for the ball to be caught, he flipped his bat. No looks at Bumgarner, no lip, just a bat flip. Probably frustrated he popped out. Bumgarner didn't think so and began barking at him. Adrian Beltre popped out of the Texas dugout to defend the rookie from the unwarranted tongue lashing. Bumgarner and Beltre exchanged words and the benches cleared. There was no brawl and no ejections but the tension was high. There was no need for it.

One might chalk this up to Bumgarner having a bad day. Except he did the same thing against the Dodgers a few weeks back for the same reason. That seems to indicate there's a problem. When asked about his tantrum yesterday Bumgarner said, "I think it's pretty self-explanatory, don't you?" Yes, it is. The guy needs to get off his high horse and play ball. He's going to incite a serious brawl if he keep it up and guys could get hurt. Bumgarner's a phenomenal pitcher. He also appears to be a prima donna. Unfortunately, judging by other cases, that attitude is unlikely to be shed in San Francisco.
Posted by Spiff at 10:23 AM