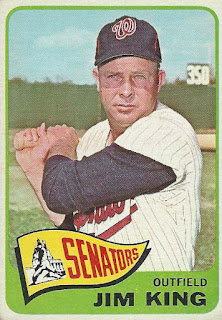 Well, another Little League game today so you'll have to make do with another pre-scheduled Senators Saturday post.

Jim King, shown here on card 38 of the 1965 Topps set, was entering his fifth season with the Senators. He was one of the few remaining players Washington got in the expansion draft. King suffered a bit of a power and defense dip in 1964 and was looking to rebound and keep his starting spot in right field.

Jim appeared in 120 games for the Senators in 1965, he played in the field in 88 of those games. All of his playing time in the field was in right field. Both the number of games he played in and the 589.1 innings he logged were significant drops from the previous season. Using his limited time to the fullest, King committed just one error all season for a .993 fielding percentage. That was well above the league average .978 fielding percentage. Jim also had much better range than the average American League right fielder.

King made 309 trips to the plate for the Senators in 1965, a drop of 169 plate appearances from the previous year. He saw his batting average drop 28 points to .213 while his on-base remained about the same at .337. Jim still had some power left in his bat though. He hit ten doubles, two triples, and 14 home runs. He walked 44 times while striking out 50 times. King bumped in 49 RBI while scoring 46 runs of his own.

While 1965 had been a decent season for Jim King, it had not been what he needed it to be. Facing challenges for playing time from several other players, he had not been able to put together the standout year at the plate he needed to keep from losing playing time. The drop in batting average was also significant and concerning. Jim would likely face more challengers for his job in 1966 and really needed his bat to return if he wanted to keep his spot in the Washington outfield.
Posted by Spiff at 10:37 AM

King's days in Washington were numbered. In 1967 (his final season) he was traded twice: to the ChiSox for Ed Stroud, then to Cleveland for Rocky Colavito.