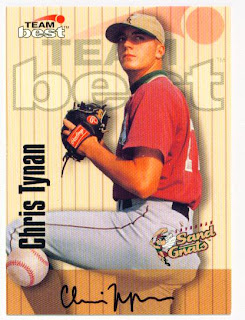 Not much seems to be going on in Surprise, Arizona. Most of the talk is about how the players are adjusting and are glad to be in camp. One small note is that the team has officially ditched the two-toned batting helmets. I must say I agree with that move 100%.

Since things are slow, I thought I would take the opportunity to take a look at this 1998 Team Best Chris Tynan autograph. This card is unnumbered and when I got it I had never heard of Tynan. I was pretty sure he had never played in the Bigs though. Some research shows I was right. Chris was drafted by the Rangers in 1997, during the time I wasn't following the game. He was taken in the second round and played in the minors for three years before his career ended. He never made it any higher than A ball. Since his last year was 1999, he was out of the system and long gone before I returned to following the game. In his three years of professional ball Tynan never had a winning season and posted a lifetime ERA of 5.11. I suppose that explains why he wasn't around by the time I returned.
Posted by Spiff at 12:28 PM