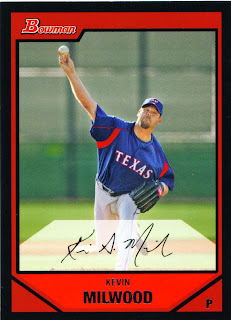 Ron Washington announced yesterday that Kevin Millwood will be the Opening Day starter for Texas. If he makes the start it will be the fourth straight for Millwood, seen here on card number 58 of the 2007 Bowman set. I believe that would give him the most ever consecutive Opening Day day starts for any Rangers pitcher. Kind of a sad note as it will put him past Jon Matlack.

Ian Kinsler missed playing yesterday. He has a bruise on his left foot after fouling a pitch off it on Thursday. So far there appears to be no break but the team is being cautious. Hopefully Kinsler can get back in form quickly. It would be a major boost to the team for him to be healthy for a full season.

Vicente Padilla will be starting the second game of the season when the 2009 campaign opens. That sets two of the starting rotation spots. So far I haven't been able to find anything on who might be filling the last two spots.
Posted by Spiff at 1:36 PM