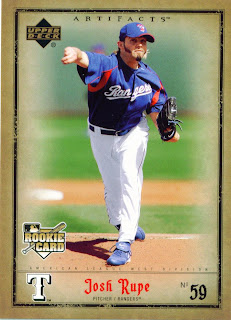 With Opening Day less than a week off the Rangers are trying to get the final kinks out and everything lined up for the start of the season. Looks like President George W. Bush will be throwing out the first pitch.

Josh Rupe, seen here on card number 90 of the 2006 Upper Deck Artifacts set, is hoping to throw some pitches himself this season. Rupe is facing off with Derrick Turnbow for a spot in the bullpen and appears to have the inside track. Josh can't take anything for granted though. He is out of options so this is do or die time.

The Rangers are also still pondering what to do with pitchers Scott Feldman, Jason Jennings, and Kris Benson. Who to use in the bullpen (if any of them), who is the fifth starter, and who should start the season in Triple A. If Frank Rodriguez is to remain the closer is also in consideration. It looks like he probably will.

Possibly the biggest question left is what to do about the Frank Catalanotto and Andruw Jones face-off. I tend to lean towards Cat due to his pinch-hitting average and the fact that he can play a little infield should the need arise. Jones has been doing better this spring but just hasn't been able to catch fire. If he would accept an assignment to Triple A (not likely) a mid-season promotion might be a possibility.
Posted by Spiff at 10:24 AM

Great looking card. For the Rangers' sake, it better be him and not Turnbow that gets the spot. He's a devious one, that turnblow.