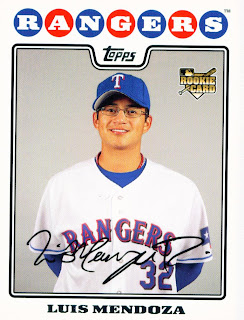 The Rangers cut two pitchers today. Brian Gordon was reassigned to minor league camp. Luis Mendoza, seen here on card number 153 of the 2008 Topps set, was optioned to triple A.

Medoza had some blister and control problems that kept him from cracking the rotation while Gordon had failed to impress. These moves leave the team with 21 active pitchers still in camp. I think the target to start the season is twelve. Lots of cutting left to do.

Speaking of pitchers, the recently signed Jimmy Gobble is still in camp. Apparently the Rangers decided to sign him since they could use some depth in left-handed relievers. Any Royals fans out there who can comment on Gobble?

Michael Young played one inning yesterday before leaving the game after aggravating a tight muscle. Ron Washington is saying that Mike is day to day and there is nothing to worry about. That's reassuring, starting the season without Young would be a drag.

Andruw Jones didn't take his free agency on Monday. Apparently he is still hoping to make the team as a fifth outfielder/DH. That would make Frank Cattalanotto the odd man out. With Cat's high pinch-hitting average, I would be sad to see him go.
Posted by Spiff at 10:05 PM